A recipe for the the most delicious chewy flat rice noodles topped with savoury, thick egg gravy sauce. It's easy, it's quick, it's delicious, it's a definite must for lazy weeknight dinners or lunch preps!

In Indonesia, we eat kwetiau (flat rice noodles) mainly two ways: fried or with egg gravy flavoured with oyster sauce. The latter is called kwetiau siram because the word "siram" in Indonesian means to pour, which is exactly what this dish is: egg gravy poured over lightly stir-fried flat rice noodles!

Growing up, this Chinese-Indonesian dish has always been a favourite in our home since it's so easy and quick to make, yet it's still super yummy. The noodles are lightly stir-fried in low-sodium soy sauce and sesame oil, which makes them savoury and aromatic. The egg gravy is slightly thick in consistency and rich due to the addition of the eggs, and is subtly flavourful from the oyster sauce, soy sauce, and chicken broth. The whole dish is completed with delicious shrimps, some juicy ground pork, and crunchy bok choys. Doesn't that just sound amazing!?

It's important to get the flavours and the texture of the egg gravy sauce right since the noodles themselves will only be seasoned with low-sodium soy sauce and sesame oil. So the whole flavour of this dish relies on the gravy sauce!

Sesame oil is also an important component of the sauce as it gives it an extra aroma that's nutty and just plain addicting. But be careful to not overdo it with sesame oil as a little goes a long way. You definitely don't want the whole dish to smell and taste like sesame oil!

The thickening agent for the sauce, as with many other Chinese dishes, is cornstarch. We added two teaspoons of cornstarch to about 2 cups of liquid sauce, which made a sauce that is slightly thick, enough to stick and coat the noodles, but not too thick that they become too rich and heavy. Remember, adding the egg to the sauce will also thicken it, so you don't want to add too much cornstarch.

A great trick to make sure that you get the perfect sauce consistency is to add the cornstarch slurry a little bit at a time and wait for the sauce to come to a boil each time you add some, since you can only see the full effect of the cornstarch only when the sauce is boiling.

As we mentioned before, the most important parts of this recipe is the flat rice noodles and the egg gravy sauce. You can definitely replace the proteins with some chicken, beef, or even fishballs if you'd like! That's the beauty of this dish, the sauce is so versatile that it'd go well with basically any types of proteins!

This Chinese-Indonesian style flat rice noodles with egg gravy sauce, or kwetiau siram is definitely a must-try. It's simple yet delicious, and it's such a comfort food! And of course, if you wanna eat it like a real Indonesian, don't forget to add some sambal into the dish! Enjoy! 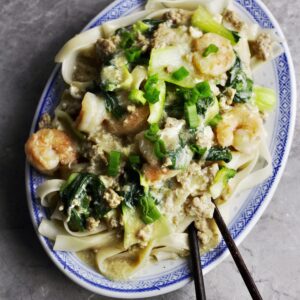