Chicken congee (or rice porridge) is for us the ultimate comfort food. The flavours are nothing out of the extraordinary, but what always hits the spot is that comforting feeling that you get when you take a bite of the warm, soft, and savoury rice porridge.

It brings back nostalgic memories of when we were kids and our parents would make us some warm rice porridge for breakfast or whenever we were sick.  And with the right toppings, you'd be surprised of the flavours and textures that you can get from a simple bowl of rice porridge.

Growing up, we used to eat congee made just with water, and would eat it with very flavored food, such as pickled vegetables, pork floss, and century eggs. However, after meeting Alvin, I discovered that people would actually make congee with broth (!!!). I know, shocking. This is his personal recipe, and it's delicious!

Congee is a rice porridge that has originated in China but since has been spread through many other Asian countries. The rice is cooked in water, or broth, for a very long time, breaking the grains and creating a thick, creamy porridge. The consistency is similar to oatmeal, polenta, gruel, or grits. This dish is often eaten when you're feeling sick, or as a comfort food on a cold day, because it's usually made very plain. It's easy on the stomach, and the thick creamy texture makes it very enjoyable to eat! Congee is also known as Jook, in Cantonese, or Xifan, in Mandarin. It's usually eaten for breakfast, but honestly, we eat it for any meal of the day, and can also be a side dish or a meal on it's own.

How to Make the Best Chicken Congee

We personally like to use long-grain rice, but there really isn't any specific rule. If you only have short-grain rice on hand, use that instead. However, keep in mind that short-grain to have more gluten, hence making the congee more thick in consistency. You can easy use brown rice for a healthier alternative.

No matter what kind of broth you use, make sure you use a good, tasty broth since all the flavours in the porridge basically comes from the broth. You can even make your own broth to make sure the flavours are just how you want them to be. We used a store-bought chicken broth that we like, and it still does a good job with flavouring our porridge. One thing to note, most rice porridges are made with meat-based broth and have some kind of meat chunks in them. If you're vegetarian, you can definitely try making it with some vegetable broth, although we've never tried ourselves. Maybe we'll give it a try one day and let you know how that turns out!

Don't skip on the soy sauce and the white pepper! It's the secret in making your congee more complex in flavor since it's such a basic recipe. With all the toppings, this recipe rapidly becomes a staple's favorite in every asian household!

What Toppings to Serve with Chicken Congee

Some people love eating porridge on its own, without any toppings whatsoever. But us, we're basically the king and queens of toppings. We'd put so much toppings that sometimes you wouldn't even be able to see that there's porridge underneath (true story). Fried shallots, green onions and coriander are our favorite toppings to add to our bowl of rice porridge. It's the trinity of toppings (for us anyway). They just give the dish so much more flavours, fragrance, and textures! You can make fried shallots at home by simply deep-frying some shallots, or you can also buy it online

or at an Asian supermarket. You can also add eggs such as century eggs or salted eggs. And one of the best best best sides to eat the porridge with is youtiao, or Chinese fried doughnuts. Other popular topping includes zhacai, salted duck eggs, bamboo shoots, pickled tofu, or century eggs. 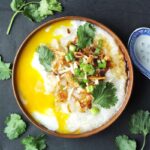 Chicken congee (or rice porridge) is for us the ultimate comfort food. The flavours are nothing out of the extraordinary, but what always hits the spot is that comforting feeling that you get when you take a bite of the warm, soft, and savoury rice porridge.